How do we transcend “Normal”?

This article was originally published in Wharton Magazine under the title Rethinking “Normal” at Work.

As uncertainty rises in the world today, so does talk of normal. Why do we want normal — or even a new normal? How can business and policy leaders show people a more nuanced understanding of the concept of normality? Better yet, how do we transcend it altogether?

The idea of normality emerged surprisingly recently. In fact, the word “normal” entered the English lexicon in the 1840s, defined as “constituting, conforming to, not deviating or differing from, the common type or standard, regular, usual.” In truth, the purest representation of normality may be constant change, natural deviation, and collective expansion. Since ancient times, “norm” has actually been a synonym of “perpendicular.” In mathematics, introducing a vector that is perpendicular to the existing vector space creates an entirely new dimension. From this perspective, the norm could represent that which expands the universe of possibilities.

Transcending normality implies the recognition that infinite possibilities are arising every moment. It connotes that we can harness universal principles consciously to expand reality for ourselves and others. In order to manifest new possibilities from the vast unknown that is unfolding beyond our understanding, we must transcend ourselves. This change in perspective has profound implications for individuals and organizations. Cultivating a culture that brings to light a broader range of possibilities naturally increases adaptability, resilience, and joy in the face of tumultuous uncertainty. This begins within leaders.

To guide leaders through this process of transformation, my company, the Merkaba Group, has developed a methodology that merges science and mysticism to support the integration of qualities such as acceptance, curiosity, and humility. This approach is based on over a decade of experience working with senior executives and policymakers.

Recognize That the Only Constant in the Universe Is Change

Philosopher Heraclitus of Ephesus made the famous assertion that all that exists is in a constant state of flux and that resistance to this fundamental truth is “a kind of death in that the individual is refusing to participate in that which defines life.” Astronomers have discovered evidence that the universe is continuously expanding, a phenomenon caused by quintessence, which is countered by the fundamental forces of electromagnetism, nuclear forces, and gravity to hold finite matter together in clusters.

These universal forces are mirrored in the human experience. Contraction is ruled by the egoic self, which emphasizes separation and self-preservation. Expansion is experienced as love and ruled by oneness, which represents a boundless infinity. This duality was conceptualized in ancient Chinese philosophy as the yin and yang symbol. The yang embodies the masculine energy of “doing,” and the yin embodies the feminine energy of “being.” These seemingly opposite forces are actually both part of each of us.

To balance the yin and yang energies within ourselves, we must accept what is happening right now and surrender to the ever-changing nature of the universe. Living in modern society, most of us have been conditioned to overuse our yang energy by exercising willpower to shape reality. This excess contraction is often driven by the fear that we will lose control if we let go. Normality has reinforced this imbalance on a collective level by creating the illusion that we must preserve the status quo.

What we think are deviations that seem off-base may actually be beneficial adaptations. That is what Charles Darwin suggested in his theory of evolution, where he regarded the principle of divergence as an essential component of natural selection. For example, over time a genus of plants can evolve to consume less water, making it resilient to droughts. Within an individual being, deviations can also be a mechanism for survival. For example, bears preparing to hibernate will eat significantly more.

Of course, not all deviations are positive adaptations. For example, it has been shown that racial minorities who experience daily stressors due to societal traumas develop chronic health problems that contribute to shorter life expectancy. That said, there is wisdom in embracing divergence as it emerges, rather than turning away from it. For example, the space shuttle Challenger disaster happened because NASA engineers trivialized O-ring irregularities as normal rather than facing the inconvenient truth.

Making the most of deviations hinges on our ability to remain receptive to what emerges without resistance or judgment. In Buddhism, the term “equanimity” signifies observing reality as it is, free of attachment or meaning. Furthermore, choosing curiosity over fear allows one to discover possibilities emerging from the unknown rather than regressing toward that which is familiar.

Quantum physicists are finding that reality may not be singular or objective. Similarly, normality is an intersubjective construct, which is to say that it is a shared agreement of meaning among a group of people. Deviations from what is considered “normal” by some may be experienced differently by others. The important distinction to make in the context of transcending normality is that factual representations of reality are entangled with interpretations of those facts.

Tuning into reality from multiple perspectives can be achieved with humble inquiry — asking questions to which we do not already know the answer and listening with an open heart. The more diverse and independent perspectives we can gather, the more reality-based our discoveries will be. Furthermore, we must cultivate the habit of letting go of our pre-existing assumptions, thereby creating the space for new possibilities that we may not have fathomed otherwise.

To tune into reality optimally, we must also tend to inner being. Scientists have theorized that everything in the universe, including atoms and electrons, is fundamentally composed of energetic vibrations. As humans, we can tune our vibrations higher — both as a choice in the moment and through daily practices. Our presence influences our environment, thus shaping reality for both ourselves and others. This empowers leaders to achieve transformational impact more easily, regardless of external circumstances.

To support practices of transcending normality, the Merkaba Group has produced a 15-minute meditation guided by Urana Heart, to be done sitting comfortably and with stereo headphones, if possible. 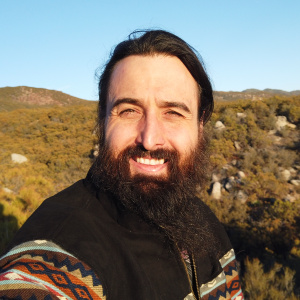 Erik Desrosiers is founder of the Merkaba Group, an organization working with leaders and their teams to transcend limits and unleash their potential through one-on-one coaching, psychospiritual practices such as guided meditations, and facilitated strategy sessions for teams.
All Posts »

Erik Desrosiers is founder of the Merkaba Group, an organization working with leaders and their teams to transcend limits and unleash their potential through one-on-one coaching, psychospiritual practices such as guided meditations, and facilitated strategy sessions for teams.
All Posts »

Enjoyed this publication? Please consider sharing with your network:

The Merkaba Group works with leaders and their teams to transcend limits and unleash their highest potential.

We look forward to connecting with you! Please take a minute to fill out this form and we’ll respond within 48 hours.
We respect your privacy. If you have any issues submitting here, you may also write directly to erik@merkaba.group.

We look forward to connecting with you! Please take a minute to fill out this form for scheduling. We respect your privacy. If you have any issues submitting here, you may also write directly to erik@merkaba.group.

Item added to your cart

Continue Shopping Go To The Cart